This week was one of the first events for the brand new store in Adelaide, the Social Gaming Club. The new store run by Charlie Ferwerda has been open for a few weeks and the Highlander scene has just started up, with 8 players popping in to compete and/or playtest in a very chill environment.

These smaller ‘low stakes’ events are a brewer’s dream, since we all get the chance to try out off-kilter decks and exciting new cards in a relaxed atmosphere that, despite still having official pairings and store credit prizes, still felt very much like a crew of friends jamming playtesting. Our matches largely ignored round timers, and along with playtesting afterward swathe group jamming Highlander into the wee hours!

I had the pleasure of going undefeated with my Esper Moat + Flyers brew, which is still looking for a good name… Firja’s RetriBLUEtion? Or maybe the tried-and-true Vintage name Blue Angels? I’m very open to suggestions!

Here’s a little look into how my evening went with this 3-0 deck at the small event:

Off the bat I play another fellow Hall of Heliod’s Generosity decks! Siran is on a Zoo Midrange-Combo hybrid deck filled with tutors like Imperial Recruiter and Sterling Grove. I immediately feel the cost of being a slow control deck as he dominates the card advantage game with Weathered Wayfarer… I flash in Aven Mindcensor at a critical moment to try and prevent a tutor for a key land, but Karakas ends up in the top 4 cards anyway! That’s an ‘oof’ for sure. I’m playing Opposition Agent in the board because Mindcensor flies, but I sure felt the cost that game (sidenote: Mindcensor having flying was relevant literally every other game that I drew it, so the Birb vindicated itself… but not after the feel-bads!). That Karakas then prevents my Avacyn from connecting, and Siran takes game one. Thankfully, I win a quick games two and three by just casting haymaker after haymaker rather than trying to control his enchantments. In one of those games I clear the board and land Court of Grace, whilst in the other I get to see the power of ‘surprise end-step, untap and suit-up’ as my Aven Mindcensor grabs a Jitte to dominate the game!

Overall, this matchup was won by a couple of key flyers backed up by the odd counterspell that together were essential at letting me play the “never tap out unless it’s your end step” game. This helped set up a controlling position, and then either Archangel Avacyn/the Purifier or Court of Grace took over the game.

Next I play Daniel on a BUG variant of my Semi-Final deck from last week, sans a few tempo cards, which were replaced with the Chain of Smog combo and ways to find it. He deployed some convincing threats like Tarmogoyf and co. to wear down my resources, with the aim to tutor for and jam the combo once the way was clear. Thankfully I was able to play the attrition game too by relying on the midrange elements of my Angels deck, and by applying pressure and forcing some responses it ended up putting Daniel one mana short on the critical turn required to tutor for and resolve the combo (which I had no counters for!).

In the grindy Midrange matchup Archangel Avacyn more than impressed me. With her ability to wipe the board, protect something from removal or trading, ambush block almost any threat in the format (outside a big Goyf), and then just plain beat-down for the win, the flexibility of Avacyn as a finisher that has mid-game value is pretty amazing. I’ve had one in my collection for ages and never had the opportunity to put her to the test, but with the above plus Flash, Vigilance, evasion, and Karakas interactions, I think I’ll be hard pressed NOT to put Avacyn in a white deck going forward!

Playing Sam on Infect (see this deck tech) is always an absolute nightmare of a matchup when I’m on Midrange or Control… If you can’t survive the early game then your value cards are entirely irrelevant (one of the best reasons to be on a proactive deck in Highlander: pseudo-card-advantage!). Whilst I had to play cautiously, I also couldn’t just let the game go forever and allow Sam to build resources. So there were a few pivotal turns where I had to decide between being tap-out-control, or reactive-control… thankfully Moat is incredibly good in game ones against Infect, and once I was able to encourage a few battles over pump spells in order to clear his hand of Spell Pierce and co., I could untap and slam Moat with impunity (despite being on 8 Poison). The rest of the game was academic from there, I just had to ensure I kept on some pressure to delay him from finding Inkmoth Nexus, Plague Stinger, or Crop Rotation. Thankfully Rankle plus an eventual Celestial Colonnade made for a fast enough clock!

Things get a little trickier post board with his access to enchantment destruction, so I brought in sweepers to stock up on ‘Moats’ so to speak. For example, Supreme Verdict is an excellent card for this kind of matchup where your opponent is on a Protect the Queen style strategy, as it invalidates Daze, Force of Will, and friends. Game 2 I mulliganned into a beautiful hand with a slew of interaction including Kaya, Liliana, and so on, which I happily threw under the bus to get the ‘destroy target creature, gain X life’ effect. It forced him to use a Vines of Vastwood and Veil of Summer on critical turns, buying me more and more time whilst exhausting his protection/pumps, which is excellent! I eagerly awaited my 4th land, ready and waiting to slam my Supreme Verdict followed by my 4-drop closers like Firja’s Retribution, Rankle, and Resto Angel to seal the deal. Sadly despite buying as much time as possible (and cycling Sharknado for no value on turn 2 just to increase my odds of hitting land for a later turn) I never saw that 4th land and simply died with a full grip from regular attacks of an exalted 2 Poison per turn. Yet another example of why I prefer being the proactive deck – if your opponent stumbles, you just destroy them!

Thankfully I get the opportunity to mulligan game 3 into a hand with a Submerge and a lot of land, allowing me to buy time to set up (tucking a Glistener Elf in response to a fetch shuffle), hit every land drop, and then just start slamming 4’s and 5’s to close out the game like a tap-out control deck.

Finishing up 3-0 by the end of the event was in no small part due to MVPs like Archangel Avacyn, Rankle Master of Pranks, Aven Mindcensor, Moat, Jitte, and Bitterblossom. Overall, keywords like Flying, Vigilance, Haste, Flash, etc. all overperformed when playing the tap-out control role as I felt like I was always immediately impacting the board in a meaningful way. I actually did not miss Mana Leak and other soft permission / reactive cards in the mainboard, and was easily able to pivot into a more traditional control role post-sideboard when needed.

Beyond the heavy-hitters, the supporting cast were probably the lands package of Celestial Colonnade, Hall of Heliod’s Generosity, and Karakas. All three were incredibly impactful in a variety of game states, and for the latter two I had a number of times where I had the opportunity to live the dream, e.g. activating Liliana to return a flyer whilst also happening to mill Moat (with Hall ready to re-draw Moat!), and another time having a Karakas to protect my Avacyn and then flash Avacyn back in at the end of their turn (unflipped, and ready to attack with Vigilance again!). Given that there are very few traditional control decks in the Adelaide meta I eschewed Cavern of Souls, but I would definitely add that to the mana base if I expected to be playing the tap-out control deck in a meta with more reactive decks (and hence I need to pivot into the proactive role and jam threats). You almost always name Sphinx or Angel, but Faerie is also an important one in a pinch.

In the course of playtesting against a handful of different Midrange-feat.-Smog decks, I rarely found that I missed the heavy counterspell package of ‘yesteryear control’. Having a large number of haymaker-style ‘tap out’ cards that fit in a control shell allows you to go toe-to-toe with midrange, and then you get to side out a little bit of permission/hand disruption to bring in the suite of Deluge, Verdict, Doomskar, and Fractured Identity, allowing you to maximise that feel of tap-out-control. Of course going in to this event I had Midrange on my radar, hence that large selection of anti-board removal spells, so I strongly recommend trimming on these and adding cards relevant to your meta (for example, Michael Hearn wasn’t at this event so I didn’t feel bad cutting Energy Flux, Null Rod, and Stony Silence for ‘dumb creature sweepers’ this evening!).

If you were interested in jamming this deck, first port of call is changing the sideboard to suit your local metagame. If there’s less Midrange then cut sweepers, Fractured Identity and Hushwing Gryff (if Thoracle isn’t highly played either). Hullbreacher is an easy cut if you don’t expect much Control or very long games. If Combo isn’t particularly well-represented, then Nihil Spellbomb, Opposition Agent, and Ashiok are the cuts, but for the rest of the sideboard you’ll find that you keep your low-mana-value cheap interaction simply because you need the tools to survive the early game against fast decks. Therefore Spell Peirce, Veto, and Submerge are key role-players and relevant in most open metas. Beyond that Kaya plus Disenchant remove a lot of important sideboard haymakers, from Carpet of Flowers and Choke respectively, to Blood Moons and hating on Uro, Arcanist, and other graveyard-value engines.

Once you’ve cut one of the packages above according to which is least played in your meta (or trimmed one off each in an open meta), then I’d recommend adding the package you best need to fight the bogeyman in your local:

That about wraps it up, enjoy!

Sarven has been playing Magic the Gathering since Stronghold (1998) and is on The Highlander Points Committee. He is well-versed in a wide variety of deck archetypes but remains an avid student of the game. Sarven is a passionate writer and seeks to apply his extensive experience in research and statistics to gaming. By day, 'Dr McLinton' works as a Research Associate at the Centre for Workplace Excellence (CWeX) managing various projects investigating psychosocial factors at work, as well as lecturing Psychology Honours and supervising PhD candidates. By night, 'McLinton Sensei' teaches traditional Japanese Karate in South Australia's premiere sporting centre, the ARC Campbelltown. He holds a 4th-degree black belt and is a gold medalist, competing both nationally and internationally in Karate and Open-style contact tournaments. 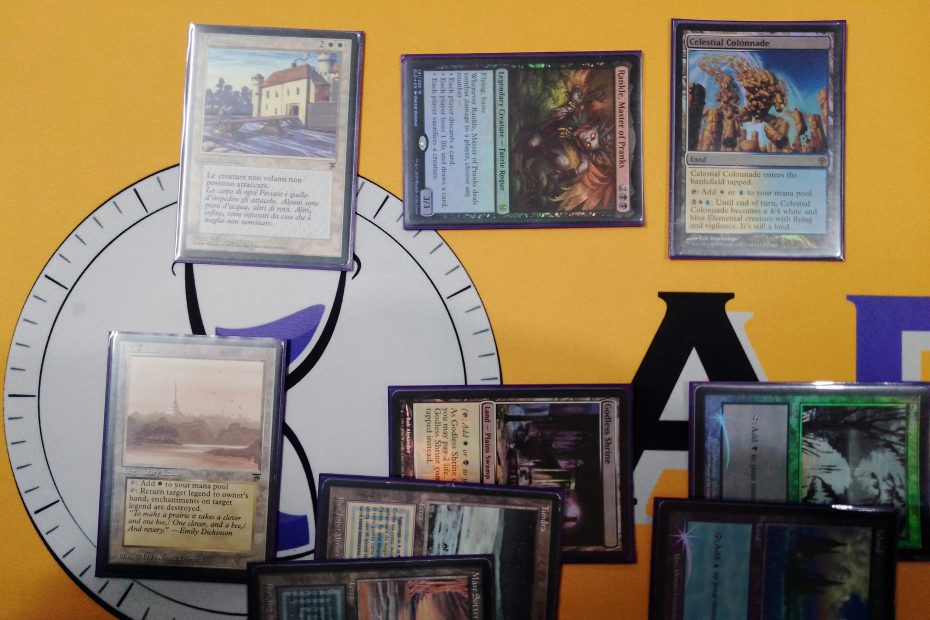