DLS once again hosted a great event with a lot of established players rocking up to hone their skills in a (relatively) new and (certainly) exciting post points announcement environment.

I tried my hand at a Big Green Hoof deck, aptly titled: “Craterhoof Behemoth + 59 other cards” after testing it with Nick House and seeing how resilient and powerful it can be (based off his original ‘GW Ramp’ on Moxfield). The addition of Urza’s Saga has given the deck much needed searchable gas off the various Sylvan Scrying effects in the list. In particular Crop Rotation at instant speed which can be cast in upkeep to get to two counters ASAP. Bosejiu, who Endures and Eiganjo, Seat of the Empire (the new channel lands) also gives the deck the ability to tutor for interaction. A lot of that doesn’t matter; as the decks name suggests – it’s about getting to Craterhoof Behemoth and then HEEEAAAVE! Hoofen em out the shop. The point is I think the deck is genuinely competitive. 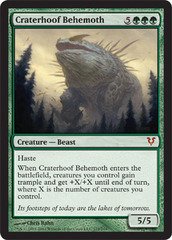 Match 1 -I played against Adam Barford on a mono white artifact deck. I used Urza’s Saga into Skull Clamp and then started to trade off creatures to generate card advantage. The board state got a bit stalled out but my opponent was successfully building board presence at a faster rate than me with Retrofitter Foundry. That’s when Hoof came in. Game 2 I had Force of Vigor on Turn 0 to hit Sol Ring and Urza’s Saga which was good enough.

Match 2 I played against Steve Lowe on Jund with a Loam & Dark Depths package. Game 1 I was building mana easily and ready to capitalize soon before Steve end of turn Dark Depths/Thespian Staged me for a clean win. In game 2 I had a pretty stressful decision to Bosejiu his tapped Strip Mine to ensure my Gaea’s Cradle survived to enable Hoof the following turn. Spending a turn to help Steve fix his mana, rather than deploy a 3 drop went against my normal ‘value oriented’ grind brain. But I treated Hoof like a combo card and it worked!

In the break some of the players were giving Zach a bit of friendly ribbing about his Mardu list being outdated and a bit mediocre. Mainly because Zach relentlessly plays Mardu in every event in every format. Zach took it in his stride and we all had a chuckle before pairings were up for Match 3.

Match 3 I played some magic against James Arthur on 4c nono Red Control. Field of the dead almost clawed me back into Game 1 which was a long grind against 3 Planeswalkers including the new Sorin the Mirthless. In Game 2 my own Nissa, Who Shakes The World proved really useful as a haste threat. Haste is a keyword that has been popping up in a lot of winning highlander lists. I ended up building to Hoof but probably could have grinded G2 out for the win anyway. G3 we just went to time. I’ll take a draw against James.

Match 4 I played Liam Whelan who was at the top of the standings on Jund. We agreed to bash since we were both locked for top 8. Main board Pernicious Deed was really good against Urza’s Saga, it’s construct and my mana Dorks. In Game 2 I think I probably Hoofed him since I won it. Game 3 I absolutely clutched him after he cast Toxic Deluge for two against my Elvish Reclaimer. I was able to cast Crop Rotation into a fetchland, fetch and turn the Reclaimer into a 3/4. To Liam’s credit, he was in the tank about how much to Deluge for so he had seen the line and possibly read it all over my face. Logic relented though and he protected his life total as he wanted it for his Turn 2 Sylvan Library. I think he made the right call. I followed up with a Scavenging Ooze into Questing Beast and ended up racing him. I did say there were 59 other cards in the deck besides Hoof…. 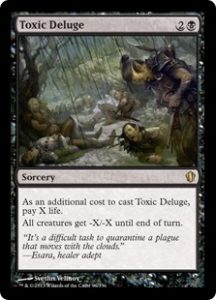 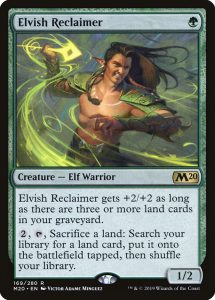 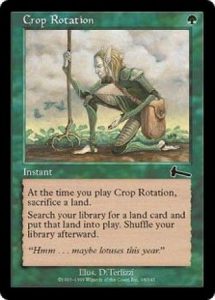 Top of the swiss and on the play going into the Quarter Finals! The top 8 is a good  mix of archetypes with (as is typical in SA) a slight over representation of Midrange and underrepresentation of combo.

Quarterfinals I played Steve again and after winning the board with Tireless Tracker, I quickly got my hands on Wasteland and Karakas to play around a Marit Lage free win. Not falling for that one again. On turn 4 he gambled and lost Liliana Last Hope. “Huh, why wouldn’t you just cast the Lili instead of risking losing it to gamble?” Oh. Right. I lucked out a bit after Steve Green Sun’s Zenithed for a card that he had sided out on a clutch turn and won by the skin of my teeth.

Semi Finals. “Beckett, you’re playing Daniel.” Who’s Daniel I say to myself. Oh. STONEY. Hot off his win at Good Games Highlander 500. We sat down and discussed Junk, Cancon, his testing with the champ Rob Lark as well as our mutual study of Daniel Abraham’s insights into deckbuilding. He conceded he didn’t know what I was on. Lucky I read the 7ph.com.au page and keep up with the latest. I knew he was on 4c Omnath. I hadn’t studied Stoney’s list inside out, but I’m familiar with Dan Abraham’s list which inspired it. Business time now and he resolved an early Territorial Kavu. My list is designed to go toe-toe with fair decks and then go bigger. From a midrange perspective it was anyone’s game and I might have gotten there trying to trade off creatures and win with swing backs. Instead, I took two turns off trying to race and invested the time messing around getting my Hoof ready. I accepted two big punches from Kavu without retribution and dropped down to 7 life before trumping the midrange mirror with the big fella.

Game 2 went something similar. Stoney is a really humble and approachable guy. In game though he is all business. You can tell by his playstyle and demeanor that he is going to be a monster to play against in the highlander scene. Lucky I got there in a quick 2-0 because he probably would have figured me out if we played longer.

Finals and I’m playing Zach. He clawed his way up from scraping into the top 8 at 7th; defeating the second seed Liam Whelan to have a dream chance at the finals with his baby – Mardu. Game 1 was a sick game. I was popping off with mana and about to untap and devastate the board until Zach deployed Liliana Last Hope which not only killed a dork straight away, ruining my following turn; it meant I had to be on Gavony Township duties to keep my other little ones safe. 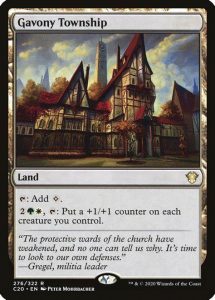 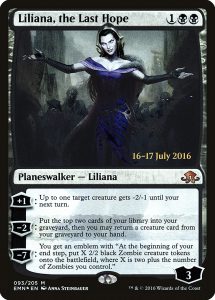 Ok, ok ok. Lili was brutal but I started generating a bit of momentum again and building towards some serious big mana. Then I got psyched out by Queen Marchesa. Monarch can be a mental battle because you feel like your opponent will snowball unless you can win it back straight away. I rushed a Hoof to push a haste threat out there to win Monarch and finish off the Lili. I also had Karakas though and I had to decide between Killing Lili, winning Monarch, and Karakas(ing) the Queen. I could do 2 of the 3. Swinging one at Lili and one at Zach to win Monarch was lame because the Queen makes Death Touchers when Zach isn’t Monarch and will win Monarch back on the swing back.

Karakasing the Queen and winning Monarch is lame for the same reason. I couldn’t lethal Zach (off by 2), and he can just redeploy Queen and stabilize with the Lili still alive. I opted to Karakas the Queen and swing at Lili. A bob each ways. Zach untaps and Sevinne’s Reclamations back the Lili. Yikes. I think I should have just played Knight of the Reliquary instead and committed to the ‘Combo’ style of Hoof play, instead of trying to compete in a card advantage battle. I’m still a midranger at heart and not yet worthy of the might of Hoof. We played it out for a bit longer and I had a line to win by going wide with a Gavonied up board state. Zach had 4 1/1 flyers and I was on 5 life; so on board I technically stayed alive long enough to go for it; but Zach had been generating a lot of value over the game and had a full grip. I made a bit of a song and dance about him bolting my face for the win, but deep down I knew he would of had an answer for it all after playing so patiently and conservatively all game. 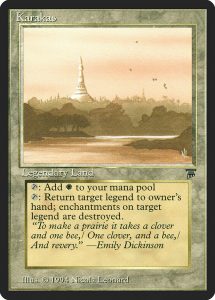 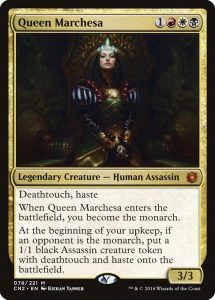 Game 2 I played a mana dork and passed. He went Mox Jet, Land, Deathrite Shaman, Prismatic Ending my mana dork on turn 1. Turn 2 he mooned me before I could supplement my land base with dorks and I scooped it. A pretty convincing win given Zach demonstrated how his deck can win with fair magic and unfair magic in two very different games.

Zach has been grinding highlander for a while now and attends events regularly. Always with Mardu. His critics have a point; there’s value in diversifying your strategy. But Zach displayed an expert level of understanding of his deck and that (clearly) has value as well. He stayed true to his colors and believed in himself and his list. Not only was his level of play impressive, but so too was the way he conducted himself in the face of (albeit lighthearted) critique, and in the pressure of the moment. Well done Zach. You showed us. 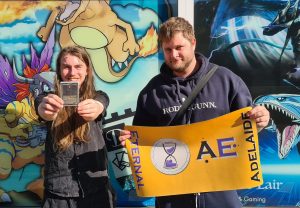