Adelaide Eternal had a Dual Land event planned for Jan 17th but sadly due to COVID-19 restrictions on our host venue we had to cancel. Phil kindly offered to use Dragon’s Lair as the alternate venue, and although we couldn’t make it the originally planned Proxy event, the turnout was still excellent with 22 Players battling for the Revised Savannah!

After the Swiss rounds these were the final standings for the Top 8 who progressed in to the Playoffs.

With a larger turnout including players from up north as well as some brand-new faces too, the metagame was very diverse! We saw a very healthy mix of ‘fair’ archetypes (Aggro, Control, Midrange, and Tempo), as well as and excellent presence from players rocking Combo decks. The ‘midrange-grind’ was kept well in check by the handful for degenerate archetypes looking to enact gameplan anywhere from Sneak Attacking a Worldspine Wurm, looping Black Lotus with Auriok Salvagers, Flashing in an Arena Rector, to Time Twister-ing with a Narset out! It was awesome to see how many Tinker, Flash, Lim-Dul’s, and other highly under-rated combo Points were out in full force on Sunday and really pushing the envelope. 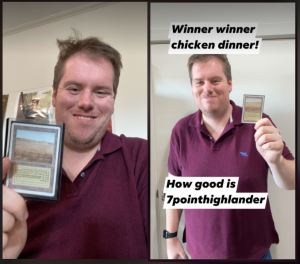 2 of these combo players (Simon Hall and Shane Cutting) progressed into the Top 8, which was otherwise comprised of 5 Midrange ‘usual suspects’ and 1 lonely Control deck… however Rob Lark has been championing Esper Control in Adelaide and not only took the clear lead as the top of the Swiss standings, but progressed all the way to the Finals and took down the whole event! Congrats to Rob for an undefeated climb to victory and taking home the Revised Savannah!