You can catch the Top 8 of the Test League on Sunday 21st February at 12pm AEDT over at twitch.tv/epicecky.

7 Point Highlander is taking over MTGO! For months community leader (and Points Committee alum) Isaac Egan has been working with community consultation to bring 7 Point Highlander online. Notable work has been done to bring webcam events to our players in 2020 but the competitive aspect of this method is understandably lacking due to the relaxed nature paper webcam matches bring.

The idea was simple – jump start the MTGO 7ph community with a free event and fabulous prizes! “Buying in” to MTGO can be a significant barrier for people wanting to play 7ph on MTGO, especially when there is no guarantee you’ll find someone to play with. Along with additional sponsorship from Josh and Pat’s MTG Bazaar, Isaac has lessened the pain of buying in to the online client by promising thousands of dollars worth of prizes. We have started with a Test League to make sure that the full, international, multi-sponsor event goes off without a hitch.

Here’s some stats for the Test League:

If the goal of the test league was to identify areas for improvement for the main league happening in March – then it has definitely been a roaring success, with help from the players we have learnt a lot of making a smooth and fun league experience.

If the goal of the test league was to bring more players into MTGO – then again, it has been a roaring success! We have even created a separate role you can sign up for to be notified for casual MTGO games, something previously only used for paper webcam matches. I have no doubt this will bring a whole new crowd of players and opportunities to play into our community!

But the party is not over for the test league yet! We are hosting the Top 8 of this league LIVE on Twitch as an opportunity to bring expert commentary and gameplay to the people! Make sure to tune in 12pm AEDT 21st February to see these titans battle it out for Highlander supremacy, there can only be one!

A Magic Player and streamer (twitch.tv/twinlesstwinMTG) who loves to try and brew whacky decks but also competes vigorously on Magic Online. Multiple PTQ Top 8’s, Modern Challenge Win, Second Place in Manatraders 15K
Final placing after swiss: 1st
Tournament Decks played in league: Grixis Thassa’s Oracle Combo Control
How long have you been playing highlander: This league was my first experience with the format!
If you could make one change to the points list what would it be: I think powerful reactive cards like Force of Will should not cost points because they are a positive force in mitigating swingy games. Then again blue is pretty strong already I just think giving other blue cards points makes more sense than Force

Works at Games Portal, Moxing Day 2020 Top 8, back to back FNM Champion Decks
Played in League: Mono Red Aggro
How long have you been playing highlander: Few years now (always mono red :P)
If you could make one change to the points list what would it be: Thassa’s Oracle to 8 points

Winner of the Bluebell Open Season 2, coming to run it back here
Final placing after swiss: 4th
Decks played in league: Esper Tempo, Bant Ephemerate, BUGr Oracle
How long have you been playing highlander: 7 years-ish?
If you could make one change to the points list what would it be: Jace the Mind Sculptor -1, mostly because the card is sweet

2019 MTGO Pauper Champion. Dead-last in 2019 MOCS. Regular FNM endboss.
Final placing after swiss: 5th
Decks played in league: Jeskai Bomberman/Breach with a lot of wheel effects. Was 6-0 until my luck ran out.
How long have you been playing highlander: I played Hermit Druid in a ~6 player side event at GP Sydney 2019. That is the only highlander I played until this event.
If you could make one change to the points list what would it be: Uro +1, Oko +1. Just tired of these cards in all the older formats. The less we see of these cards the happier people will be.

I live in San Francisco and am in grad school for social work. I’ve been playing Magic off and on since 1994, but I don’t have any accomplishments past the PTQ level.
Final placing after swiss: 6th
Decks played in league: I went 5-0 in my first 5 matches with Bant Junk, then played Kirblinx on Breach Combo and got demolished, and promptly switched to his list for the final round. It seems both fun and strong, although I don’t expect to play it very well.
How long have you been playing highlander: Since registering for this league last month!
If you could make one change to the points list what would it be: I don’t have enough experience to make a reasonable suggestion.

Representing Sydney in this top 8. Plays MTGO/MTG Arena mostly. Likes to cast Paradoxical Outcome in Vintage. Playing in nationals when that was a thing. Casting Blood Moon before it was cool. #greedcreep
Final placing after swiss: 7th
Decks played in league: 4c Midtroll (Midrange)
How long have you been playing highlander: Played in a tournament 7 years ago but just getting back into it because of the league.
If you could make one change to the points list what would it be: Mana Drain to 0 points!

I live in Seattle and am a host on Faithless Brewing, a Modern and Pioneer focused podcast. I’m the only player to ever 5-0 a Modern league with Slitherwisp.
Final placing after swiss: 8th
Decks played in league: Blue Moon. Then Blue Moon with Extract in the SB. Then Blue Moon without Extract in the SB.
How long have you been playing highlander: Canlander — 2 years. Auslander, basically this tournament.
If you could make one change to the points list what would it be: Wasteland to zero, helps punish the ‘soup’ manabases.

Lots of new players and established players across 3 timezones battling it out for the Test League top prize! This is not an event you want to miss!

You can catch the Top 8 of the Test League on Sunday 21st February at 12pm AEDT over at twitch.tv/epicecky. 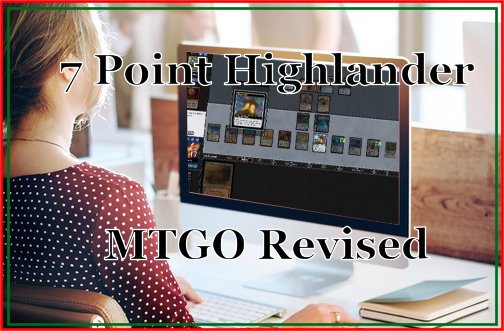